STATEMENT BY REGGIE MARTIN, AUSTRALIAN LABOR PARTY on the statement “Ramping is worse than ever” and the Electoral Commissioner’s finding

The Electoral Commission has found that an advertisement published by the Australian Labor Party was misleading and inaccurate to a material extent.

The ad in question showed a paramedic discussing her experience dealing with the ramping crisis.

At the time the ad went to air, there was no data available that showed the hours that had been lost to ramping in 2022.  The latest statistics released publicly were the monthly ramping figures for December 2021. The Liberal Minister had previously said that ramping figures would be released quarterly, and the next figures were due to be released in April, which would have shown the ramping numbers for the January to March period.

There is no dispute about these statistics. They are the Marshall Government’s own numbers.

I authorised the advertisement featuring the paramedic – including the statement “ramping is worse than ever” – based on these Government statistics.

Despite me providing to the Electoral Commissioner all the ramping statistics I had available to me when the ad went to air, being the ramping figures for every month from February 2014 to December 2021, which showed the terrible state of affairs with ramping when the ad went to air, the Commissioner concluded that the ad was inaccurate and misleading to a material extent because in October 2021 the level of hours lost to ramping was 2,868 hours (the all-time high), whereas in February 2022 it was 1,522.  This was despite the fact that January 2022 was the worst January on record for ramping, and February 2022 was the second worst February on record, which in my view only confirmed the continuing upward trend in ramping experienced under the Marshall Government, and despite the fact that elective surgeries were banned in South Australia for the whole of January and only returned fully on 28 February 2022, which was likely to have been an artificial, temporary factor in alleviating ramping in January and February without solving the underlying ramping problem or addressing the continuing overall upward trend in ramping.

I also provided to the Commission evidence given in the Employment Tribunal by a Senior Ambulance Service official on behalf of the Government, stating that in the last days of February and first days of March, ramping had increased significantly, returning to upward amounts and the upwards trend in ramping was expected to continue.  This was evidence given by an official of the Government, not the Union.

Despite all this evidence, the Electoral Commissioner chose to assess the complaint based solely on the ramping statistics in the four-month period from the end of October 2021 to the end of February 2022 in making his finding.

Here is a chart showing ramping numbers for each 12-month period ending in February each year, going back to 2016/2017.  It speaks for itself. 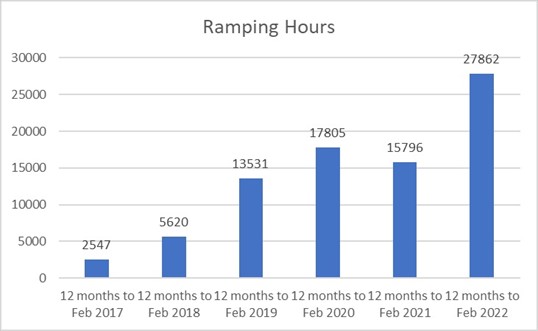 There is now evidence that has been obtained by the Ambulance Employees’ Association that shows that since the February figures were released, ramping in March has shown a return to the longstanding trend, now that elective surgeries have started again, confirming the Government’s evidence in the Employment Tribunal on March 7.

Having provided the above context, I will now address directly the retraction that the Electoral Commissioner has asked me to publish.

Here is the first paragraph of the retraction that the Commissioner has asked me to publish.  I agree with its content:

The Electoral Commissioner has also asked me to withdraw the statement that “ramping is worse than ever”.   I am unable, in good conscience, to do so.

The Electoral Commissioner has also asked me to publish the following additional paragraph:

The statement contradicts recently released hours lost due to late transfer of care (TOC) data which shows that ToC times have declined by 47% since their peak in October 2021.

I do not agree with this paragraph.

The following statement is true:

The evidence available now, in mid-March, is that ramping in the month of March has increased dramatically compared with February, and the longstanding upward trend that has occurred under the Marshall Government is continuing.

Authorised by A. Bourke for the Australian Labor Party, 141 Gilles St, Adelaide SA 5000.